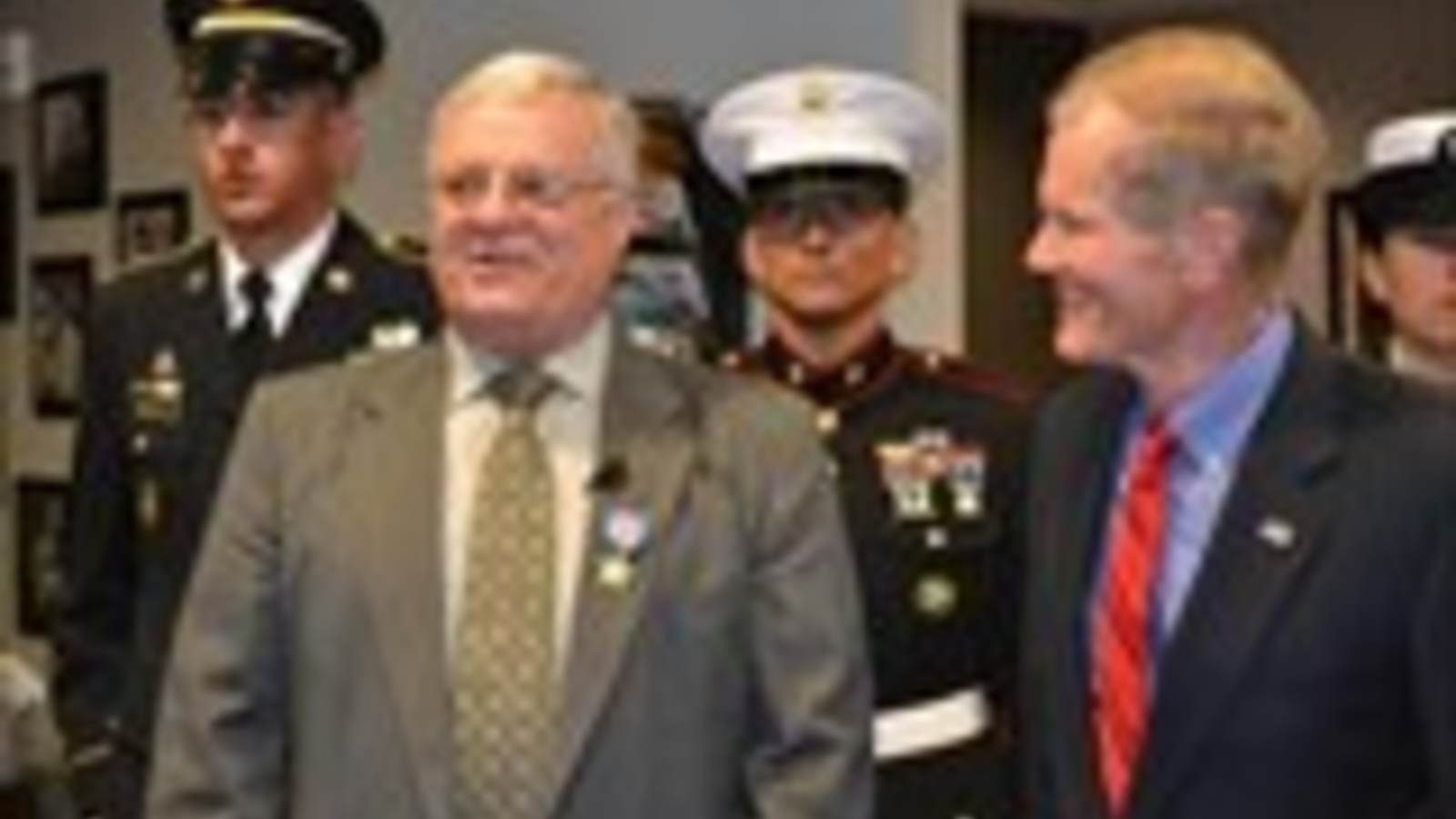 Almost 42 years after a horrific firefight during the Vietnam War, a Parrish man has finally received the Silver Star he had earned. Ralph A. Morgan, 62, received the award Tuesday in Tampa during a ceremony hosted by U.S. Sen. Bill Nelson, D-Florida.

Blinking back tears, Morgan listened as Nelson praised the gallantry and devotion to duty the award represented. Morgan replied with a heart-felt “thank you,” and added, “And I want to just remember all of the good, fine young men and women, past and present,” who served the nation’s military.

“It’s fitting that 42 years later, we can give a soldier, a sergeant, the recognition he deserves, and that a nation can say to him: ‘Sergeant, a job well done,’” Nelson said following the ceremony. Asked how he felt, Morgan replied, “I am feeling somewhat elated and comfortable, and excited, and I am certainly feeling honored to be in the presence of all these fine people and our senator.”

Morgan described a bloody day in which a handful of soldiers managed to hold off much greater numbers of enemy troops, during an interview Monday. “We were heavily pounded,” he recalled of that day: June 4, 1971. The Army Special Forces radio operator manned a machine gun, a radio and also handled assault, air support and evacuation. Morgan intentionally moved around his outpost deep in enemy territory, drawing fire away from his platoon and toward himself, Nelson said in presenting the Silver Star. Morgan was able to hold off the enemy with just his M-16 rifle long enough for his platoon to retreat to a safe perimeter location, where they were rescued by helicopter, Nelson explained.

The Silver Star is the military’s third highest decoration for valor, awarded specifically for gallantry in action against an enemy, officials said. The ceremony took place at the USO Tampa Bay at Tampa International Airport, the first such presentation at the new center.

Morgan served in Vietnam in 1971-72 as a member of the 5th Special Forces Group, he said. He knew an order for the citation had been signed before he left Vietnam in January 1972, and had inquired several times over the last 40 years about it. “They said the records had been lost,” Morgan recalled. Finally, he called Nelson’s office, and a formal hunt for the paperwork began. The emotional awards ceremony was the result.

Part of the problem, Nelson said, is that heroes like Morgan are modest and thus, their sacrifices go unnoticed. “What a great day for not only Tampa Bay but what a great day for America that he’s finally getting the recognition he deserves,” said Nelson.

After the ceremony, Nelson also remarked that, at the time, the Vietnam War had politically divided the country, and war veterans were sometimes mistreated when they returned to the U.S. Morgan said he had been spit upon at the Port Authority of New York, a humiliating experience.

Morgan hails originally from Port Jervis, N.Y., and spent 30 years working at the Michigan Department of Corrections. He moved to Florida in 2006, and found work helping local veterans find jobs, but retired in August 2012.

Accompanying Morgan at the ceremony were his children and grandchildren, who hail from Michigan, and a sister, Pat Medrick, 65, a retiree from Leesburg. “I’m very proud of him,” said Medrick. “Also, it’s a good thing for him because, for 40 years, he was unable to talk about it – maybe it will get rid of some of the angst.”