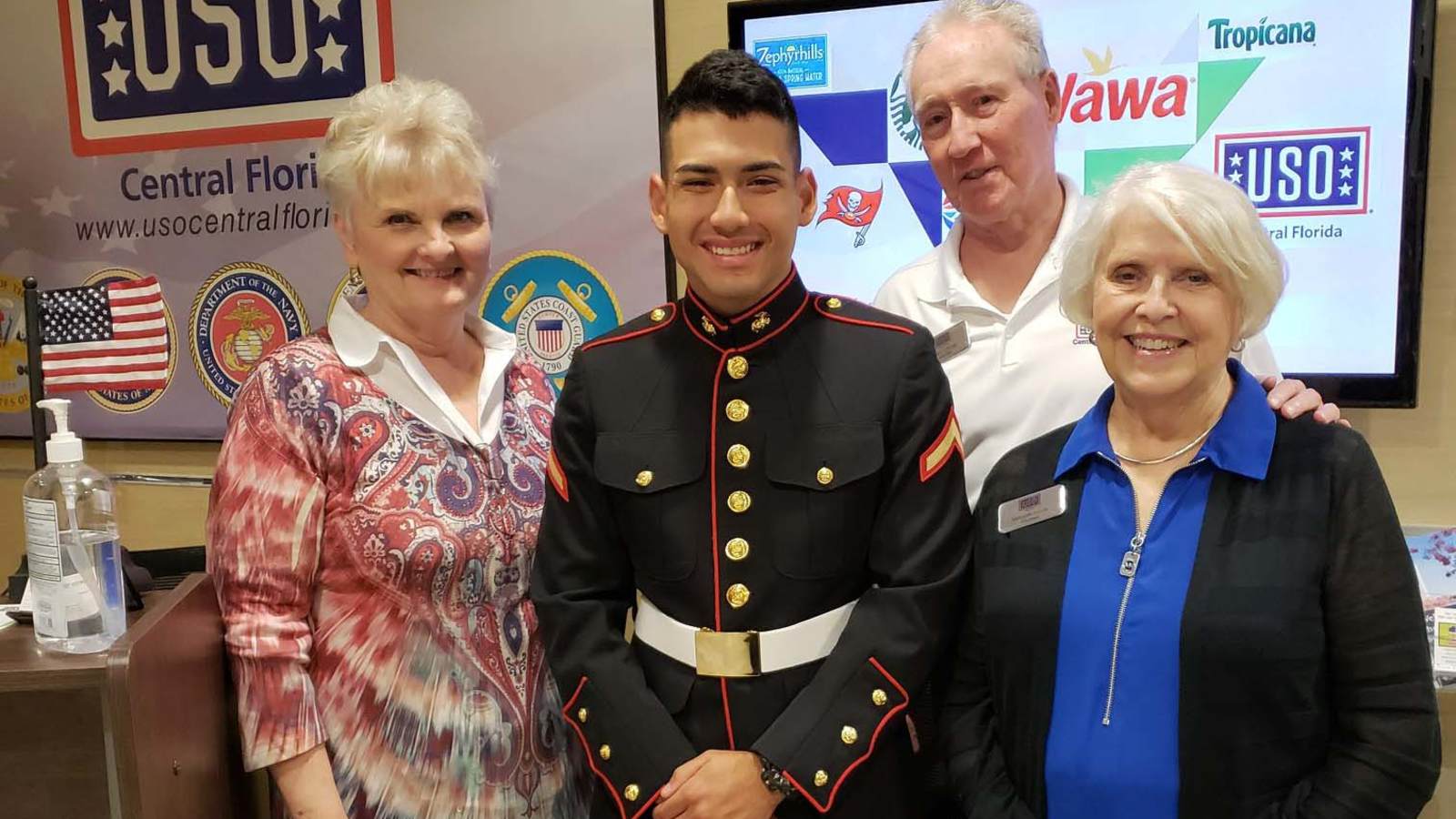 USO volunteers play a critical role in strengthening America’s military service members by keeping them connected to family, home and country throughout their service to the nation.

Since 1941, millions of volunteers have given hundreds of millions of hours to support service members and their families from World War II and the Korean conflict, to Vietnam, the Persian Gulf, Iraq and Afghanistan.

There are countless ways volunteers support the USO. Whether its cooking up some homemade food for hungry service members, demonstrating how to create a craft for kids, warmly greeting every visitor to a center, or providing a listening ear, our volunteers are the reason service members know they can count on the USO.

“Our amazing USO volunteers are the heart and soul of our organization. They volunteer out of their kindness of their hearts and are dedicated to strengthening our service members and their families through their commitment to our centers and programs,” said Mary Cunningham, Center Operations Supervisor, Tampa International Airport USO center. “We can’t thank our USO volunteers enough. Without them, our centers and programs would not be able to serve our nation’s heroes and their families.”

In 2019 alone, the USO volunteers at the Tampa International Airport USO center volunteered 16,481.25 hours of volunteer service, providing service to over 26,746 service members and their families passing through the center, taking a much-welcomed break as they waited for their next flight.

While each and every USO volunteer is critical to helping the USO accomplish its mission, many volunteers go above and beyond the call of duty. USO volunteers at the Tampa International Airport are committed to ensuring our nation’s service members and their families who visit the center each day feel welcomed and at home.

This group of stand-out volunteers have all donated hundreds – if not thousands – of hours to the USO, making them an integral part of Central Florida USO’s volunteer force. Often, theirs is the face you first see walking into their USO center, greeting you with a smile. They’re the person that “always seems to be at the USO,” or is “always willing to help.”

Simply stated, they embody the mission of the USO and inspire those around them with their dedication to community service and commitment to our nation’s military. Get to know Central Florida USO’s Tampa International Airport center volunteers, who help to take care of our nation’s service members and their families:

Alan Thompson, a Vietnam Veteran who started volunteering with Central Florida USO since its opening in 2012, has volunteered well over 8,764 hours. Beginning his career in the U.S. Navy as a radioman, Thompson was retrained as a Navy Corpsman and served a 12-month tour of duty with the Marines in Vietnam, where he received a Bronze Star Medal.

“This is the best volunteer experience I have ever had. I truly enjoy interacting with the military community,” said Thompson. For Thompson the most impactful part of being a USO volunteer is helping grieving families as a member of the Honor Support Team (HST) who assist in the dignified transfers of fallen service members who travel through the Tampa airport in year’s past.

“As a member of the HST, I can help the families of the fallen find some degree of comfort and help ease their burdens while waiting here at the airport for their fallen service member to arrive as they make their way to their final resting place,” said Thompson.

Mary Curts, who volunteered to serve as a U.S. Army nurse with a Mobile Army Surgical Hospital (MASH) Unit in Vietnam in 1970 has been volunteering at the center since 2017 and has worked over 885 hours, ensuring service members and their families feel welcomed at the USO center.

After her tour of duty in Vietnam, Curts made her way back home to Iowa, but after a few short months, Curts and her best friend made their way down to Tampa, Fla., to work as nurses in the new Veterans Affairs (VA) hospital being constructed back in 1972 and has remained in Tampa ever since.

Retiring from nursing in 2016, Curts looked for new ways she that could help her community and found renewed purpose in supporting service members and their families by volunteering with the USO.

“I just like knowing that I’ve got a purpose. Even though my service was a long time ago, it’s still a part of who I am and I want to give back to the next generation of service members who are doing so much for our country,” said Curts.

What Curts enjoys most about volunteering is welcoming the new recruits and trainees who travel through the airport center each week. “Most of these young service members are straight out of high school, and have never really traveled much in their lives, let alone fly on an airplane,” said Curts. “To be here from them and help them find their way truly means a lot to me.”

John Gilbert, Joseph Bogdan, and Conrad Doerbecker are a dynamic team who regularly works together twice a week on the same shift. All three are combat veterans, who have collectively served well over 30 years of honorable active-duty service, and have over 200 years of life experience between the three.

Gilbert, an Air Force veteran who served in Guam during WWII as a strategic air lift coordinator, started volunteering in 2014 when was 87 years old and who just turned 94 this past October.

Doerbecker, a Vietnam veteran and Purple Heart recipient takes his role a USO volunteer seriously and ensures that service members and their families are taken care when they travel through the USO center. Originally from South Brooklyn, New York, Doerbecker explained why taking care of service members is so important to him.

“To me, volunteering is my way of giving back to the USO who took such good care of me when I was recovering from being wounded in Vietnam,” said Doerbecker. “I spent 15 months in the Valley Forge Pennsylvania hospital recovering, and the USO out of Philadelphia came to visit us every Tuesday, offering sandwiches and refreshments and other entertainment to help us feel better.”

“The USO didn’t have to visit me in the hospital, but they did. That’s why I am here today, to give back and take care of those who serve our country like I was taken care of,” said Doerbecker.

Bogdan, who served 20 years in the U.S. Army, enjoys volunteering because it provides him an opportunity to guide and mentor young service members that travel through the center, while putting smiles on their faces and making them feel welcomed and appreciated.

“We’ll sit out here with these young service members for hours, having a great conversation,” said Bogdan. “It’s a true privilege to give back to the military community and serve as a mentor and share my years of military experience with them.”

Roxane Jordan has been an active volunteer since 2012 with over 1,691 volunteer hours working at the center and as a lead volunteer for hundreds of programs and events within the local military community at MacDill Air Force Base, U.S Coast Guard Station Clearwater and Saint Petersburg.

Jordan’s greatest joy of volunteering is getting out in the local military community for special events. She recently supported a Spooktacular Halloween trunk or treat at U.S. Coast Guard Air Station Clearwater, Fla., and is looking forward to Central Florida USO’s annual Operation Stuff a Stocking event to help local military children have a special holiday.

“It truly warms my heart to see the smiling faces of the military children who get such as surprise from the USO around the holiday season, and throughout the year for that matter,” said Jordan. “We do a lot of events in the military community, and I absolutely love supporting our service members and their families.”

Marjorie and Joseph Lucas have been volunteering with the USO since 2012, helping with events and programs both inside and outside the center. Marjorie has worked over 3,062 hours, signing up for two shifts a week for years, and her husband Joseph who graduated from the U.S. Military Academy at West Point in 1960, retiring in 1988 as a U.S. Army Colonel, has logged well over 180 volunteer hours since joining the Central Florida USO team.

With frequent moves throughout their time in the military, Joseph nor Marjorie experienced the benefits of the USO given the austere duty stations they lived at, such as Panama. However, when they learned how the USO took care of their grandson who missed his connecting flight traveling home for the holidays when he was cadet at West Point, they learned more about the USO.

“He flew from West Point to Philadelphia, and somehow missed his connecting flight,” said Marjorie. “Luckily, he went to the USO at the airport, and they made sure he was feed, provided him a warm cot, and ensured he was up early the next morning to catch his flight after serving him a hot breakfast.”

“I was so impressed with the USO, I knew that volunteering with them would be so rewarding, by taking care of other service members who may find themselves needing a place to feel safe and welcomed, like my grandson did when he missed his flight,” said Marjorie.

There are countless ways volunteers support the USO, but they are all unified in their dedication to our service members and their families. Whether it’s helping at a special event, greeting and cheering at homecomings, working the front desk or providing a listening ear, our volunteers are the reason service members know they can count on the USO.

The fidelity and commitment of our volunteers have served as the backbone of the USO for over 80 years, and they will take us into many decades to come of connecting service members to family, home and country.

To learn how you can become a USO Volunteer please visit uso.org/take-action/volunteer.